2 You As a Learning Agent

2.3 A note on terminology

The name of this book comes from an idea I recently had about the different kinds of knowledge that are necessary for understanding AI:

These three kinds of knowledge form what I call the “AI triplet.” Expertise in AI often requires being able to think about the same concept at each of these three levels, both separately and in combination.

You can see an illustration of the AI triplet here: 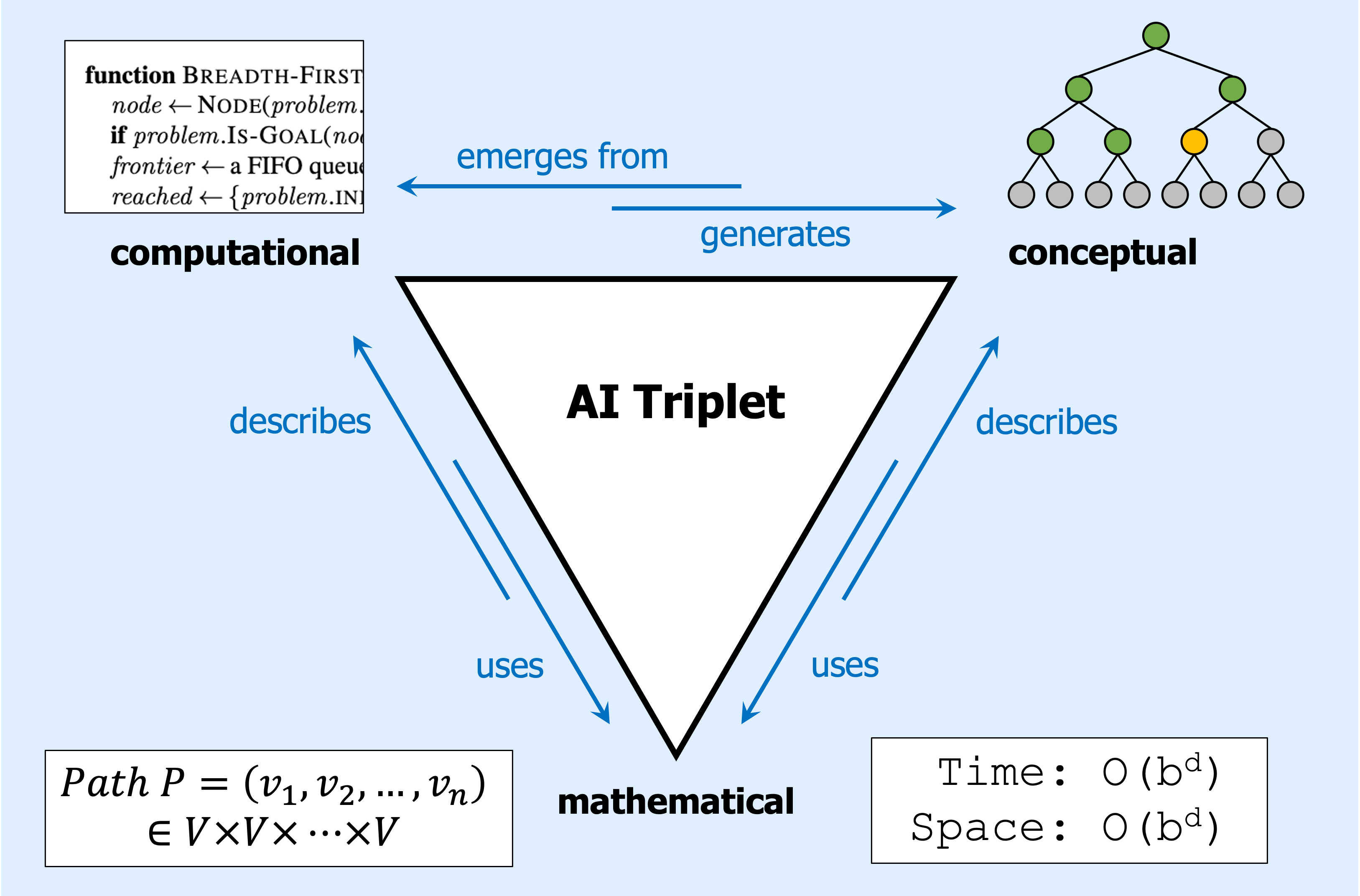 This idea was inspired by the “chemistry triplet,” a similar triad for chemistry that was originally proposed in 1982, and that has been very influential in chemistry education.

In chemistry, as shown below, there is a submicroscopic level that consists of particles and waves and so on. Interactions at this level generate phenomena at the macroscopic level, which includes human-scale things like solids and liquids and different substances. Then, there is a symbolic level that contains all the human-created notation to describe things at the other two levels. 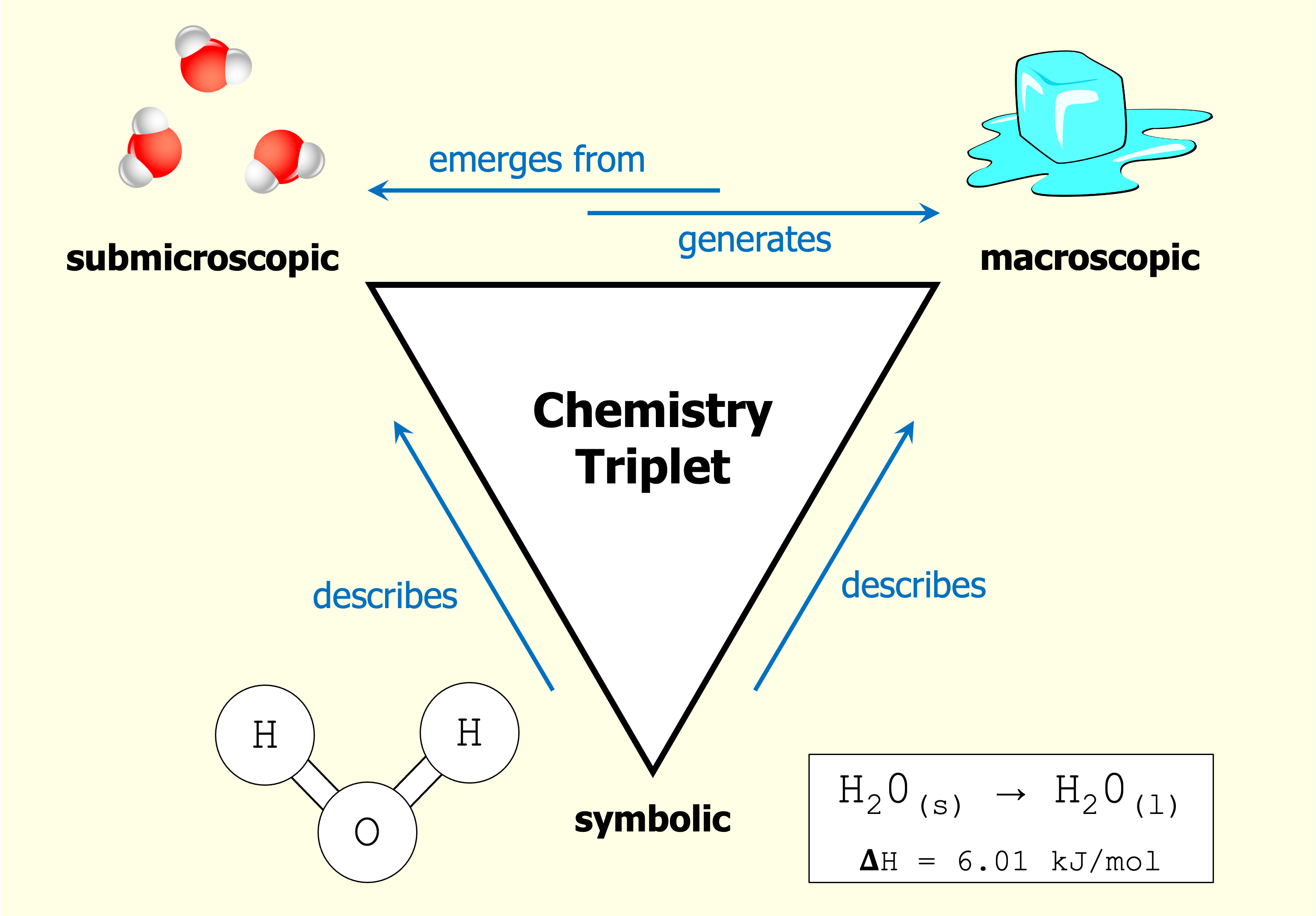 In other words, pieces of code in the computational artifacts that we build are a bit like particles in a chemical system. They interact and undergo various behaviors and changes, often in complicated ways that we cannot predict from the starting state of the system. Eventually, just as particles interact to produce what we call a liquid, the pieces of code in AI systems interact to produce conceptual behaviors like searching through a space of possibilities. These conceptual behaviors are eventually combined to produce chess-playing systems, car-driving systems, image recognition systems, and so on—all of the AI capabilities that are comprehensible to us at human scales.

And, finally, just as notation in chemistry is a human-created construct that is useful for describing and modeling chemical systems, in AI, we use math as a formal construct for describing (or designing) things that are happening in our AI systems. Sometimes math shows up in the form of equations and calculations, and sometimes just in the style of formal notation that we use to describe AI problems or elements in an AI system.

Throughout this book, new topics and ideas will generally be introduced at the conceptual level, and then we will add discussion of what is happening at computational and mathematical levels. Eventually, you will be able to more easily jump around the various levels when thinking about a given AI topic.

2.7 Why official AI textbooks are a good choice (at least initially)

I am devoting an entire subsection to this topic because I believe it is quite important.

The following section include links to other helpful and interesting resources for learning about AI. But first, a brief discussion of AI information in today’s Internet world.

There are a lot of AI resources out there on the Internet right now, including many “informal” ones like blog posts, Medium articles, Github projects, discussion forums, YouTube videos, and the list goes on. While it is exciting to see so many people excited about AI and excited to share their thoughts about it, the result has become something of an information maelstrom, awash with valuable, totally legit pieces of treasure mixed right in with random flotsam and jetsam and dead fish and stolen goods.

To be more explicit, while there is a lot of really great AI material out there, I have also seen an unfortunate proportion of AI material that is (a) flat-out wrong; (b) plagiarized; or (c) both.

The obvious suggestion would be to follow the usual sorts of best practices for evaluating the credibility of your sources. For example, is the author actually named; do they present their credentials; what is the website domain; how did you find the particular resource, etc.

I remember one post that almost made sense to me but didn’t quite…and then I searched more and found that it was essentially just a bunch of sentences that had been cribbed from a couple of other sources and strung together.

However, the current information maelstrom is just so maelstrom-y that I think these usual practices don’t actually weed out all of the bad information. For example, even as an AI expert, I sometimes have trouble figuring out if a blog post actually makes sense or not.

I remember finding one site that was the main .com domain of a very reputable and globally known technology company, and I was shocked to find pages in their “AI knowledge base” that were just flat out incorrect (e.g., claiming that a particular well-known AI algorithm does a particular thing, which it fact it doesn’t do at all). I guess the company wasn’t doing very good quality control on those pages on their site, but it was really unfortunate, because it definitely looked like a legitimate resource that one ought to be able to trust.

To take another example, I have seen objectively incorrect information on website domains that looked quite trustworthy to me.

In my own self-guided learning, I have found that it is extremely difficult for me to simultaneously learn a new AI topic and be screening for the trustworthiness of information at the same time. I think that part of the difficulty is cognitive overload, and part of the difficulty is that if I don’t know a topic already, then it is almost impossible for me to judge the correctness of what I am reading about it.

Therefore, my strong, strong recommendation for learning new AI things at any level is:

1. When first learning a particular AI topic, use a well-established textbook or other resource that you know is reliable.

2. Then, once you are solid on the basics of that topic, you will be MUCH better equipped to swim around in the maelstrom on your own and be able to sift out the treasures from the flotsam.

With that said, here are some recommended resources for further reading, divided into three lists:

These are some of my favorite readings, ranging from the casual to technical, that provide all kinds of food for thought for AI people to chew on.

Some are AI-centric, and others are more about human or animal cognition. Many of the latter make for VERY interesting thought experiments, if we consider whatever example of intelligence is being presented and then ask ourselves, “How might this kind of intelligence work, from a computational perspective?” And its corollary, “How could we build an AI system that would ‘think’ in this way?”

(Why read this random books? AI = combination of learning technical skills and thinking about big ideas. No accident that many of AI’s major advances came from cognitive scientists - list them.)

Readings that are more AI-ish

Readings about science and scientists

Readings about other human achievements

View source
Website analytics provided by Plausible.io, a deliberate choice made to preserve your privacy. (See here for more on the rationale behind this choice, and the role of AI in modern surveillance.)

This work is licensed under the Creative Commons BY-NC-ND 4.0 License. This means you are welcome to redistribute material from this book but only: (1) WITH attribution, (2) for NON-commercial purposes, and (3) WITHOUT modifications, in order to preserve the intellectual integrity of this work.